In the massive clean-up after Cyclone Yasi unleashed its fury on Townsville in 2011, John Wilson and Mike McCloskey and their fellow Carlyle Gardens Retirement Village residents decided they would be more than ready next time.

For their tireless efforts, the energetic duo was formally recognised at the Get Ready Queensland Resilient Australian Awards where they won the community category.

While initial efforts in the cyclone's aftermath saw village fridges and freezers emptied to make food available in one location via a back-up generator, John and Mike believed a more coordinated approach was needed with weather events like Yasi occurring more frequently in North Queensland.

Fast forward to 2014 and the Carlyle Gardens Disaster Management Group is established.

Together with residents and village management, John and Mike then help to formulate a disaster management plan focussed on assisting elderly people, some with complex needs – to be prepared, respond, recover and stay safe during natural disasters.

Once the plan is activated, more than 60 residents go into action to implement systems which including accounting for all residents as well as triggering proper evacuation procedures if necessary.

The Get Ready Queensland Resilient Australian Awards were hosted by the Department of Infrastructure, Local Government and Planning.

The awards are a national program that recognise and promote disaster preparedness initiatives as well as celebrate innovation and ideas and highlight work that is often unrecognised.

This year, Queensland topped the nation for the most number of entrants received, a testament to the great work being undertaken by individuals, groups, corporations and government across the state.

The state winners will now represent Queensland in the national awards, with the winners to be announced in late 2016. On 20 February 2015, Tropical Cyclone Marcia crossed the Capricorn Coast bringing with her all the might and power that mother nature could muster, and leaving immeasurable damage, devastation and heartache. Photographer Karin Calvert decided to revisit some of the people she met when she covered Cyclone Marcia for various media outlets last year, and showcase a photographic exhibition to acknowledge communities, individuals, and other organisations that were instrumental in aiding the recovery of the community after the cyclone.

The winner of the People's Choice Photography Award was Bob Jaecocke's portrait, from the Twenty: Cyclone Marcia – Rescue, Resilience, Recovery Exhibition, which marked the one-year anniversary of Cyclone Marcia. The individual portrait represents members of the community who were all instrumental in the rescue and recovery efforts. It acknowledges their resilience through the worst of times and illustrates how their determination to re-group and rebuild is unshakable.

The exhibition received support through the Regional Arts Development Fund, a partnership between the Queensland Government and the Livingstone Shire Council. Protecting the North began in September 2014 with ground-breaking research by the Cyclone Testing Station at James Cook University, which analysed insurance claims data from previous cyclones to identify the most vulnerable aspects of homes, and what communities and governments can do to address them. The research has improved understanding of the main causes of cyclone claims, and identified innovative ways insurers, the community, and government can work together to address these risks and increase resilience. Protecting the North continues to be used as a key resource for governments in determining future mitigation policies in northern Australia and has been recognised in the Australian Government's 2015 National Climate Resilience and Adaption Strategy as a best practice resilience example. The Burnett River Floodplain Action Plan project addressed flood risk and improved resilience across the Bundaberg local government area by integrating extensive scientific, engineering, and community consultation processes. Building on technical flood studies and experiences of the community associated with the record flood of 2013, this project engaged with community in a remarkable way to generate resilience strategies. These strategies were subjected to multi-criteria analysis in order to yield a final set of mitigation strategies that had a demonstrated scientific and economic efficacy to improve resilience wanted by community. What is a disaster resilient city focused on a comprehensive stocktake of the state of resilience in Cairns – on both a social level and infrastructure level. Using a combination of both the Torrens Institute and United Nations Office for Disaster Risk Reduction (UNISDR) scorecard methods, Cairns is the first regional city to undertake a scorecard exercise and first local government to take the initiative of combining the Torrens and UNISDR scorecard methods to gain a comprehensive baseline measurement of resilience. 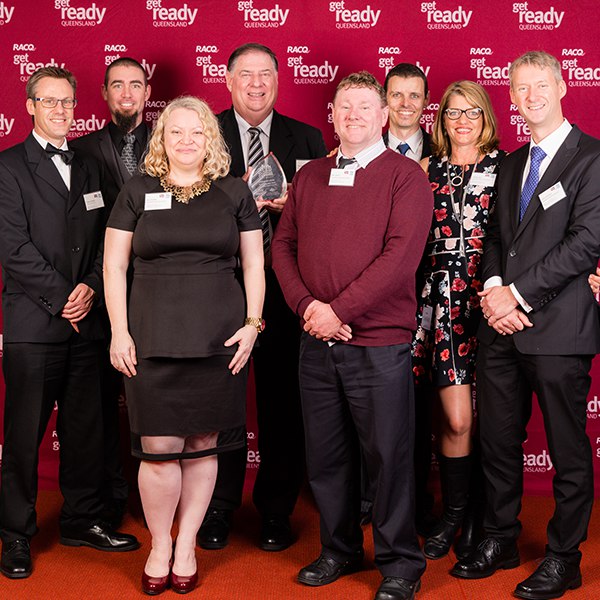 The SCC Disaster Hub was developed by Sunshine Coast Council to improve disaster resilience across all sectors of the region. It provides an intuitive solution for the community, council and first-response agencies by gathering disaster intelligence from numerous sources to improve decision-making during disaster activations. It provides comprehensive, centralised, and real-time information for the public, media, and external agencies to access before, during and after disaster events. It delivers lifesaving information accessible from any device, anyplace, anytime and by anyone. The Business Adaptation Network (BAN) offers a platform for best adaptation practice that can be shared to mainstream responses and lift our nation's resilience to the impacts of climate change. Working with Green Cross Australia, BAN is a group of diverse, yet like-minded organisations united in their forward thinking when it comes to climate adaptation. It's all about practical, informed action. Climate change presents opportunities as well as challenges. Foresight is crucial. BAN has over 20 members who share a passion for delivering positive adaptation responses and learning from each other – this includes members from Australian universities; local and state government; financial, legal, research and engineering institutions; and the property, telecommunications, logistics, energy, water and industrial sectors. BAN focuses on the key strategic areas of building business and community resilience by delivering events, workshops, partnership projects and thought-leadership on place-making, diverse financial instruments, business continuity planning and hypothetical scenarios for increasing capacity in emergency management. During the aftermath of Cyclone Yasi in February 2011, the retirement village lost power for seven days. Residents, with the assistance of management, entered evacuated units and emptied refrigerators and freezers – collating all food products in the central theatre area maintained on backup generator supply. The food was distributed through this central location, allowing the community to maintain self-sufficiency without reliance on emergency providers or the local disaster management group. This event highlighted the need for a more formal approach to managing disasters at the village.

Resident leaders within the community established the Carlyle Gardens Disaster Management Group for the purpose of assisting residents to prepare for, respond to, and recover from natural disasters, particularly tropical cyclones which are prevalent in tropical North Queensland.

In September 2014, the initiative was formalised by residents in collaboration with village management, who jointly undertook a comprehensive disaster planning program culminating in the Carlyle Gardens Retirement Village Disaster Management Plan. The devastation of ex-Tropical Cyclone Oswald was widespread, with many landholders unable to return their agricultural enterprise to a productive state without assistance. Social and mental health support was also required to cope with the trauma and seriousness of the situation. The program provided financial support to 100 properties in the region, however more than 380 landholders received assistance, be it social, economic or environmental through community programs such as the flood recovery and resilience workshops, or one-on-one field officer, technical or specialised engagement. Community events were essential inclusions in the recovery process as they provided an avenue for the farming and grazing community to interact, share, and pull-through together. As well as providing landholders the means to restore infrastructure, fences and banks, the program supported the planning and construction of more resilient infrastructure.