The Brisbane architecture firm that beat an international field to help the Queensland Government rebuild the terminals after the devastating 2011 floods has won a prestigious architecture award for the design.

The Brisbane Ferry Terminals Redevelopment Project, described by judges as 'innovative, mechanical and maritime engineering design', features a floating pontoon structure tethered to a single up-stream pier, which will be highly resilient in the event of future floods.

'The Office of the Queensland Government Architect was responsible for suggesting and overseeing the international competition after the 2011 floods,' he said.

'The Queensland Premier at the time, Anna Bligh, recognised the significance of such a project and that it was not just about replacing what was destroyed.

'The government wanted to initiate the design of new iconic pieces of infrastructure for Brisbane because this would lead to a better, more liveable city.'

Cox Rayner Director Brendan Gaffney said the company was proud that its design, in partnership with Aurecon, had been recognised on a number of levels by the Australian Institute of Architects.

'We devised a number of solutions to prevent destruction from flooding in the future,' he said.

'These included fitting the gangways with air tanks, a hinge and a clasp enabling them to float and swivel around under the flood's force; a single pier tall enough to prevent the pontoons floating off and robust enough to withstand large vessel impacts as well as shaping the pontoon like a boat to deflect debris.

'At the same time, the terminals were designed to enhance the experience of river travel and of public engagement with the river.

'For example, removing the multiple piles opened the river to unimpeded view, a canopy provided shelter and ramping on the pontoon guided movement and offered varied places to relax.' 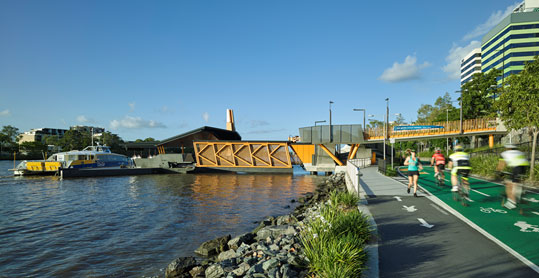